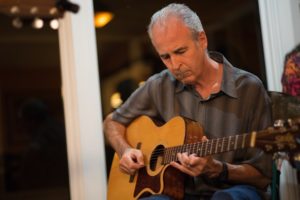 I began learning guitar at the age of 12, playing a nylon-string Goya classical guitar. I taught myself first position chords and barre chords, and learned all my favorite popular songs.

Just five years later, I was playing guitar professionally, performing as a singer/songwriter on steel-string acoustic in clubs in Chicago. Soon after, I founded a rock band in San Francisco, where I played lead guitar and sang. For seven years, we regularly played clubs and concerts in the Bay Area.

At 27, I formed my first progressive jazz group. Soon after, I moved from San Francisco to New York City with that group where we performed in jazz clubs all over the city. At the same time, I was recruited as the lead guitarist in a popular New York rock band that performed regularly in major rock clubs in the New York area. During this period, I was honored to be awarded a prestigious National Endowment for the Arts Fellowship for Jazz Composition.

While in NYC, I played with the progressive jazz band THURSDAY GROUP, as well as with rock bands REVERSE, the TRANCESENDERS and BLUESOLE.

Throughout my long career, I’ve always enjoyed making time to provide private guitar lessons to budding musicians and guitarists looking to advance their skills to the next level.

In 2007, in search of sun, fun and, of course, great music, I relocated with my wife, Gabrielle, from New York City to St. Petersburg, Florida.